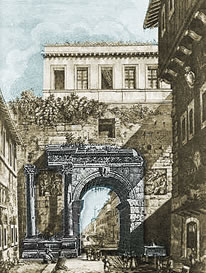 The original name of this arch isn't known; it is known that it was located along Via Lata and was called Arcus Trofoli or de Tripolis with reference to a triumph concerning the victory over three cities but it isn't known which were and obtained by whom; it may have been erected under Marcus Aurelius, a hypothesis supported by spolium reliefs with representations of the Antonini dynasty.
In the 15th century the arch that was now called Arch of Portugal, because nearby was Fiano palace the residence of the Portugal ambassador, determined a bottleneck in the Via Flaminia, at time called Via Lata, and caused many fatal accidents during Berbers horse races, games of the Carnival period, which took place along the Via Lata.
For this reason Pope Alexander VII, in 1662 decided to demolish the arch and entrusted the task to Domenico Fontana and Felice Della Greca.
The arch was stripped of its architectural decorations which consisted of bas-reliefs; some of these were transferred to the Palazzo dei Conservatori on Campidoglio Hill, others were purchased by the rich and powerful to embellish their dwellings along with part of the columns and marble slabs. Of everything else it was done limestone.
The papacy has never taken into consideration the monuments of ancient Rome and the marble plaque that was placed where the arch was erected is proof of this: the plaque does not remember the arch but only the "pubblicae commodite" that it's obtained with his demolition !!
The arch was placed at the height current Via della Vite; from the drawings Rossini and others made we can imagine how the arch was inserted in the long straight of Via Lata (now Via del Corso) in the Baroque age and then arrive at the original features of the arch.
This arch, believed to have been built in the 2nd century AD and restored in the late Middle Ages, it had a single fornix, built with blocks of travertine and peperino and decorated with four columns of green marble and reliefs from the age of Hadrian.
The Arch seems to have been constructed with spolia (elements of recovering) because the decorative elements that are clearly attributable to it don't refer to specific facts that allow to identify a specific triumph and surely ascribable to an emperor.
Scholars believe that it may be the triumphal arch of Marcus Aurelius and Lucius Verus that, anyway, would have undergone major restoration work at the time of Aurelian when he transformed it into one of the entrances of the Sun God temple.
From the drawings and reliefs made before the demolition we know that on the north side there were two large bas-reliefs in which the scholars believe the emperor Hadrian can be represented with Vibia Sabina or the emperor Antoninus Pius with Faustina the Elder; these are the bas-reliefs that are now found in the Palazzo dei Conservatori with an inscription that identifies them as Marcus Aurelius and Faustina Minor; the same inscription also contains the name of the magistrate who was in charge of the move to the new site, someone named Carlo Antonio Pozzi, Knight of Santo Stefano Order.
These are two large bas-reliefs perhaps belonging to another arch dedicated to the Antonines anyway and which are known as Ad locutio of Adriano and Apotheosis of Vibia Sabina. In the first bas-relief the emperor Hadrian is depicted on a high podium, at whose feet are the figures of the Genes of the Senate and the Roman People and in the foreground the figure of a togaed child. In the second is the apotheosis of Vibia Sabina, the unloved wife of the emperor Hadrian, but nevertheless deified after her death. The emperor, seated on a bench and in the presence of the Campus Martius Genius, witnesses the apotheosis of Sabina who's rising from the funeral pyre on the shoulders of a winged female figure, recognizable as Aeternitas. From the study of bas-reliefs and some literary testism, it was assumed that these bas-reliefs belonged to an honorary arch built after AD 138 for Adrian by his successor Antoninus Pius who, due to the hostility of many senators to the late emperor, struggled greatly to have the adoptive father recognized as a divus.
These bas-reliefs, as can be seen by careful observation, were reworked again in Roman times, so much so that some scholars believe that the faces of Vibia Sabina, Hadrian, and the magistrate have been transformed into Maximinus Thrax, his wife Paulina and her son Maximus (235-238 AD) or Valerian, his wife Mariniana and son Gallienus. At the end of the last century two fragments were added to the two large bas-reliefs that could have been part of another of the bas-reliefs of the arch; one of these fragments, marble in large crystals, size cm. 115 x 49 and is 25 cm thick.
The scene was to represent a military podium under that are two barbarians with their hands tied behind their backs, above them we see the emperor's feet and another soldier receiving the submission of a city or a province, represented by a kneeling female figure with a rich garment for which an erote, whose figure is at the center of the fragment, intercedes and asks for clemency. Scholars believe that the fragment is part of the representation of victory in Jewish campaigns of Hadrian and that the province represents the Judea.
But the arch of Portugal could be the answer to one of archaeological questions on the monuments of ancient Rome debated still: where was the Arcus Triumphalis that, according to the coins and bas-reliefs where it is represented, was a four-sided portico surmounted by two quadrigae pulled by elephants? ...