The discovery of the Ara Pacis Augustae 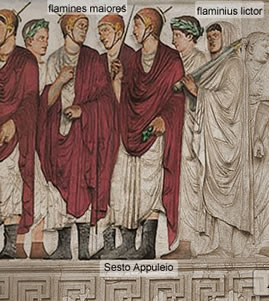 In his political testament Res Gestae Divi Augusti (12.2) Augustus remembers the decision taken by the Senate of Rome on July 4, 13 B.C. building an altar consecrated to the Augustan Peace in the Campus Martius ordering also that, every year, the magistrates, the priests and Vestals should celebrate sacrifices there.
Ara Pacis Augustae was built between 13 and 9 BC to celebrate Pax Romana achieved by Augustus after 3 years of successful wars in Gaul and Iberia. The altar was erected at a precise point: 1 mile from Pomerium or where the consul who was returning from the war lost its imperium militiae to acquire the imperium domi and had an entrance to the Via Flaminia (then Via Lata and today via del Corso) and one towards the Champ de Mars.
The place, with a strong symbolic value, however had geological characteristics such that already Antonine the part up to the podium appeared buried and it was forgotten 100 years after.
The Middle Ages covered most of the monuments of ancient Rome, and only when the city returned to be such, because there was fixed the seat of the papacy, you began to build and in the construction of foundations of new buildings started to reappear many works of ancient art. "Cavare" of individual pieces of Roman sculpture during the construction of new buildings was a custom that since the fifteenth century was also considered an asset in the contracts so that the precious remains were left as payment for the work that architects and builders had to accomplish. To the major collectors were proposed so many artifacts that often it was difficult to attribute; in the same period in which fragments of Ara Pacis were circulating, was found other artifacts which were scattered abroad in ancient times and then reused in other monuments and which today are believed to be pertinent to another altar, the Ara Pietatis of age Claudia of which the structure and original location is still unknown today.
Ara Pacis has had a more linear story, preserved by natural events became trapped under layers of mud that the Tiber deposited on several occasions in Field of Mars.
Discoveries confirmed that the monument was still visible in the Trajan age: by the digs of '900 emerged a retaining wall around, it was high m. 1.80 and placeb about m. 2.50 from the monument builted by bricks with stamps dating 123 A.D. At that time the monument already was about 2 meters below the floor level of the surrounding area; two centuries later it was completely disappeared, in fact not a word about the Ara Pacis appears in the Mirabilia of the IV century. A.D. The first news that from the foundations of a building in Via in Lucina was resurfaced "something" comes from an engraving by Agostino Veneziano performed before 1536 that depicts a swan with spread wings and a large portion of the frieze spirals. In 1568 during the works in Palazzo Peretti - Via in Lucina 4 -, emerged nine marble slabs that bought the Grand Duke of Tuscany and then donated to the Uffizi but whom was not certain the origin; during other work in 1659 emerged other sculptured reliefs which partly remained in Palazzo Peretti and in part were sold to the Vatican and to Leopoldo de Medici, who used them to decorate the facade overlooking the garden of the Villa Medici ...