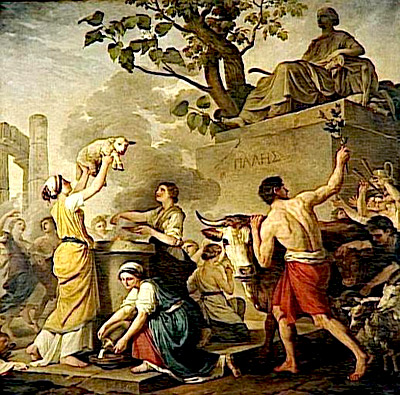 The men who built their huts on the hills facing the small island on the Rumon River sought a chance for a better life. The boats that went up and down the river came from distant lands and asked to be able to supply themselves with fresh food to the shepherds and farmers who lived on the hills.
These men received in exchange tools, utensils and clothes from more advanced people who did not care about them until they saw stone houses rise and, along the river, the mooring and passage points began to be guarded.
The formation of the first nucleus of the city named Rome was certainly favored by the position on the river, in fact already in the Iron Age pagi (group of huts) had arisen on the tuffaceous slopes of the hills along the Tiber river, but until the 7th century BC, the valley between the Palatine Hill and the Capitol was the burial place of those who inhabited the hills facing the river. From the seventh century B.C. the inhabitants of the hills began to protect their homes delimiting with fences the boundaries of their new city which took the name Rome from the river gave it impulse.
Legend has it that Rome was founded by Romulus, marking with the plow the border of what will be known as the Rome Square, on a specific day, April 21, 753 BC.
The annalists are almost all in agreement in believing that the Square Rome was the foundation pit that was built as described by Ovid in the Fasti (4,189) on the day of the Parilia:

… right day is chosen, in which to mark the walls with the plow:
the feasts of Pale were coming; then the work began.
A moat is created up to the solid part, fodder is thrown on the bottom
and land brought from the nearby soil;
the moat is filled with soil, and an altar is placed on the filled part,
and the new hearth lends itself to a burning flame.
Then pressing the handle traces the walls with a groove ...

This traditionally accepted date is the one indicated by Varro, who when he began to write Antiquitates rerum humanarum et divinarum urged Lucius Tarutius, a philosopher and mathematician friend of his, but better known as an astrologer (it is worth remembering that for the Romans astrology was a science like astronomy and mathematics), to identify the exact day of foundation of the city based on the transit of the stars and planets. Lucius Tarutius, based on complicated calculations, came to establish that the year in which the foundation rite took place was 753 BC. and on the day of April 9th.
In reality Varro had asked Tarutius to study the horoscope of Romulus and this came to establish that Romulus had been conceived in the first year of the second Olympiad which should correspond to 772/1 or 769-8 BC, dates to which he refers. Plutarch in his Vita Romuli. Moreover, scholars doubt that Romulus was a real character. If Romulus is a legendary character, then all the astrological construction with which we went back to the date of the foundation of the city decays, which according to archaeological finds should have had its beginning much later in time ...