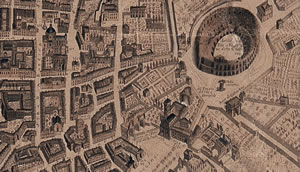 Via Alexandrina was ordered by Pope Alexander VI who made enlarge the ancient Via Recta for the Jubilee in the year 1500; the road ran parallel with the Campo Vaccino and connected the Colle Oppio with the slopes of the Quirinal Hill. The development project came later thanks to Cardinal Bonelli, nephew of Pius V Ghislieri said the Alexandrian because native of Bosco, a small town in the province of Alessandria in Piedmont; the intervention was all the more necessary because the area had become a marshy area for rainwater that accumulated down from the surrounding hills. This area in ancient Rome was drained by channeling the waters in the Cloaca Maxima but as this since the Middle Ages was occluded, the area was covered by water so as to be called "The bogs".
The interest of Cardinal Bonelli to urban intervention was not only dictated by the need to improve traffic flow in Rome that was regaining a role as the capital of Christianity, but also had an economic impact, in fact, the Cardinal was the Prior of the Order of Knights of Malta, who had in possesion most of the land area on which, once reclaimed, could be built more and more needed homes in a city where the population was growing as the consequent demand for houses.
The urban intervention of the Cardinal Bonelli involved the reclamation of the whole area: the Cloaca Maxima was reactivated, even in the stretch where crossed the Forum of Nerva was replaced with a new exaust manifold that retraced at higher share of the original tract, the so-called "Chiavicone of Suburra". After they proceeded to a considerable work of filling of areas in order to get a leveling that would allow the street to run straight from the Basilica of Maxentius until Trajan's Forum for about 400 mt. The route of the new Street had already been studied by Antonio da Sangallo the Younger as a straight connection between Santa Maria in Campo Carleo at the Tower of Conti, but he was unable to carry out the project because he died in 1546; the following year he was instead made the straightening and widening of the stretch between the Tower of Conti and the Coliseum.
It was the Cardinal Nepos to inaugurate the new road; Via Alexandrina was opened on the extension of Via Santa Eufemia, along the route that connected the church of Santa Maria in Campo Carleo, tower of Conti and the Basilica of Maxentius, continuing toward the Colosseum. Around the new road developed the District Alexandrine where they were built modest houses and palaces (such as the building of Flaminio Ponzio and the so-called Palace of Sixtus IV or Ghislieri), artisan and commercial shops like the famous inn within the " Colonnacce ".
The decision to re-discover the remains of ancient Rome, decreed the cancellation of the Alexandrine District; between 1924 and 1933: all the houses of the neighborhood were demolished paying attention to only save the Roman buildings, even went so lost important evidence not only of the Roman Baroque, but also the medieval buildings that had settled on the ruins of the immense Forum of Trajan, but for a twist of fate, on February 22, 1933 during the demolition of the building at 101 Via Alexandrina a mason with a pickaxe dropped an iron plate that hid a compartment in the wall and from there started falling golden coins and jewels. The mason took home the "treasure", but the news that he had been found a treasure was spread soon and many rumors began to circulate, and they came up to the Governor of Rome, who instructed the police to conduct investigations ...