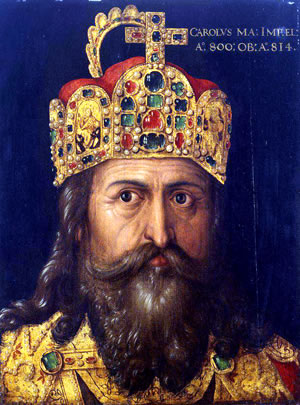 On Christmas Eve of 800 AD, the Holy Roman Empire was born in Rome when, in St. Peter's, Pope Leo III crowned Charlemagne saying: "To Charles Augustus crowned by God, great pacific emperor of the Romans" and the crowd that filled the Basilica burst into exclamations of joy and acclaimed him as supreme prince. This was the act that strengthened the bond between the Franks and the Papacy that already with Adrian Ist had recognized in the frank king the Patricius Romanorum, or the defender of the Church.
The issue can be considered one of the first episodes of the confrontation between the Papacy and the Empire, with which the Pope tried to gain a position of autonomy of the church from the Emperor's control; however, in 795 when Leo III was elected, the problem were the relatives of the deceased Adrian, feared losing their privileges, while relations between the new Pope Leo III and the king of the Franks Charlemagne were set up in the name of political continuity.
Leo III, newly elected pope, sent to Charlemagne the keys of St. Peter and the standard of Rome city, these symbolic gifts were accepted by Charles as he accepted the new Pope even if he had doubts because he knew that Leo advocated the right to temporal power of the church. The Frankish king sent a letter to the Pope to remind him of his apostolic mission but together he also sent part of the spoils of war with the Avars which can be considered an ante litteram crusade.
With the treasure received by Charlemagne, near Lateran Palace, Leo III had built a hall for non-religious ceremonies known as Triclinium Leoninum and, in the apse of the hall he let made a mosaic that represented the vision that the Pope had of the relationship between spiritual power and temporal power. In the apsidal basin Christ with the Apostles are represented; on the left Christ gives the keys to St. Peter and to Constantine the flag with the cross, while on the right is St. Peter giving the episcopal pallium to Leo III and to Charles the flag of the cross .
Leo III had been elected pope with the vote of all the bishops and had modest origins unlike his predecessor Hadrian I, belonging to the Roman aristocracy, for which the Roman nobles, worried about losing their prerogatives, accused him of being absolutely unsuitable for papal tiara as he was a "dissolute man".
The opposition to the Pope went on, inside and outside the Curia until 799 when there was an attempt on Leo III. The Pope was attacked by his opponents, beaten and imprisoned in the Monastery of San Erasmo al Celio from that he managed to escape and to refuge in St. Peter's where he found the emperor's ambassadors who helped him to save in far away Padeborn, near Charlemagne.
Here came also his accusers who claimed that he would exonerate himself or renounce the papacy, but they were unable to prove the accusations and so Charles sent everyone back to Rome where, in his presence, a confrontation would take place during which the accusers had to give evidence of what they claimed and the Pope should have given his explanations. Charlemagne arrived in Rome in November of the 800 AD.
The confrontation between the Pope and his accusers took place in St. Peter's at the presence of all; accusers could not present evidence of the accusations made and the pope consented to exonerate himselves before the whole assembly by swearing on the books of the Gospel that "of his free will, from no one condemned or forced, he declared himself innocent before God of every suspicion". In this way the question was resolved and the dignity of the Pope was saved.
In those days in Rome there were also the Patriarch of Jerusalem envoys who gave Charlemagne the keys of the Holy Sepulcher, the Calvary Hill and the City of Jerusalem as well as his banner; these gifts were the testimony of the authority that was recognized to Charlemagne also by Christian communities of the East.
The following day, it was Christmas day in Saint Peter's Basilica, in the presence of Charlemagne, his retinue, the Roman aristocracy and the Curia, the Pope was celebrating Christmas Mass when, with a sudden gesture, he placed a crown on the head of Charles absorbed in prayer and acclaimed him three times; it was the first coronation in the West since the fall of the Roman Empire ...