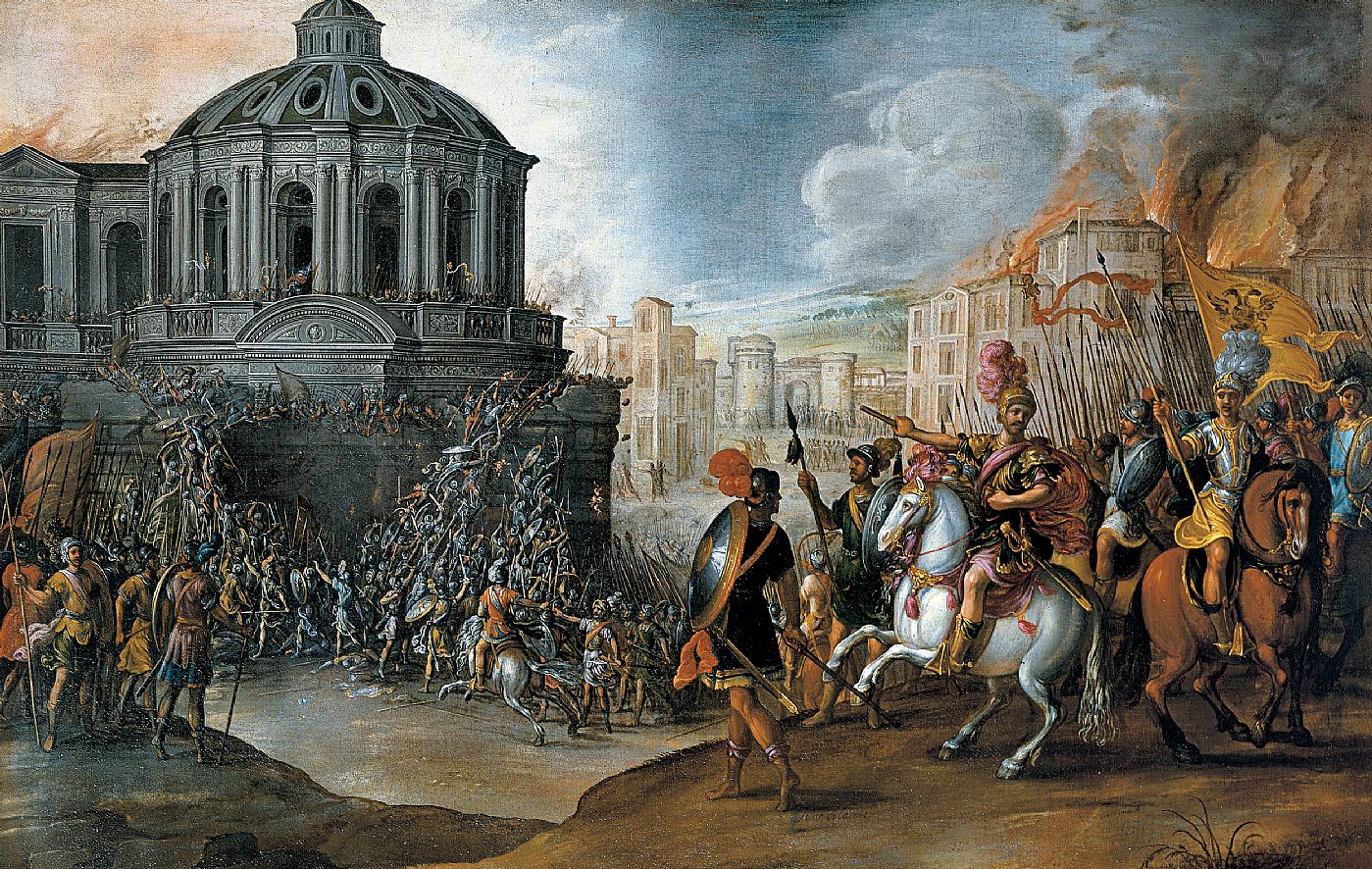 When during the war between the France of the Valois and the empire of the Habsburgs who controlled Spain and Germany, Pope Clement VII decided to support the French king, joining the Italian states against Charles V, attracted to Rome the wrath of emperor.
The army of Charles V went down in Italy to reaffirm his supremacy and arrived in Rome on 6 May 1527; the army consisted of 30,000 men, of which 16,000 Spanish mercenaries and 14,000 German Lansquenets, even they volunteers but in fact soldiers who received the pay every five days and whom, if the pay did not arrive, were allowed to loot for a day.
The Pope had entrusted the defense of Rome to Renzo of Ceri who could count on 5,000 soldiers and a strong artillery.
The troops of Charles V had arrived in Rome after a long journey and, for strategic reasons, they had not given battle yet and the soldiers were depressed and without pay for some time. Their commander, to incite them, said:

If you ever think of looting a city to earn wealth and treasure, here it is! The richest: the lady of the world.

On the morning of May 6, the soldiers of Charles V attempted the assault from Borgo; the first attack was rejected but then a small group managed to enter from a cellar and the few defenders could do nothing but run away. Pope Clement VII, who was praying in St. Peter's, was dragged away by a squad of Swiss Guards and, running along the Passetto, taken to the refuge of Castel Sant’Angelo.
The Lansquenets invaded Borgo S. Spirito and Saint Peter and, in numerical superiority, massacred the Swiss Guards who remained to protect the Basilica. They sacked everything that was there, even the tombs of the popes were tampered where they hoped to find hidden treasures .
Charles V had sent the Lansquenets because he counted on their anti-papal spirit as they were all of Lutheran religion; the aversion towards the Pope and the Curia was also manifested with a sort of procession up to the Pope's windows barricaded in Castel Sant’Angelo.To the cry "Vivat Lutherus Pontifex" they claimed that Clement VII gave them the sails and oars of the "Saint Peter's ship", and finally by scarring, Luther's name was engraved with the tip of a sword on the fresco "The Dispute of the Blessed Sacrament "in the Raphael Rooms as well as other sayings that are still visible when viewed against the light at the bottom of the fresco.
The Lansquenets who arrived in Rome came from Tyrol and they lived for over six months in difficult conditions in the cold and without pay because of the political maneuvers, of the papacy and of the empire, there had been phases of truce and few significant clashes that they did not have had as epilogue the conquest of the city and therefore of rich booty. Prince Charles of Bourbon, the imperial army commander, had barely checked the rebellion of the troops of Lansquenets but also of Spanish army whom did not receive the pay for months.
When they finally managed to take Rome, it was a real "barbaric horde" that swept through the city; three days of looting were authorized, but when the order to stop it was given, the soldiers did not respect it and the looting continued to the bitter end.
The violence and ferocity with which the Lansquenets attacked the city and its inhabitants was motivated by hatred for the Catholic church but the situation became uncontrollable because the soldiers remained without their commanders, one of whom died, struck by artillery during the siege, and the other suffered a stroke and had to be returned to the Tyrol.
To understand how devastating was the presence of the imperial troops in Rome, it must be considered that the population was just 55,000 inhabitants, of which a part fled before the arrival of the soldiers who dropped in 30,000. These troops, however, were formed not only of Lansquenets and Spaniards, but also of Italians, soldiers of fortune and troops of other Italian states who had lined up against the Pope, led by their commanders. Among these was Cardinal Pompeo Colonna who took part in the siege with the soldiers he had gathered in his fiefs; almost 8,000 men who participated in the sack of Rome behaving even worse than the Lansquenets and the Spaniards ...